When rescuers were notified about a very sick stray dog, living in a sewer drain somewhere in the outskirts of Athens they found a feral and aggressive dog who never had been around people. However, Save a Greek Stray refused to give up on him.

They caught Monty with the help of a tranquilizer and got him back to town to treat him, but that is only the beginning of his journey. 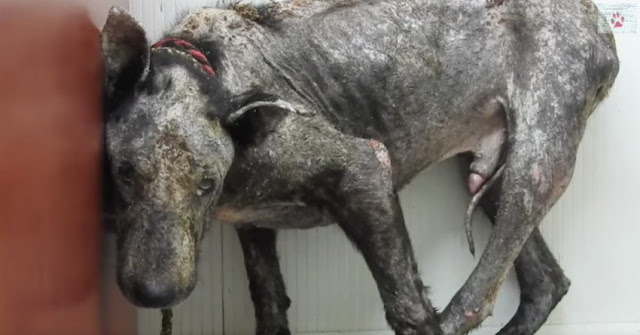 “He suffered from an old fracture in his hind leg, leishmaniasis, mange and his body was covered in ticks and fleas. He made a full recovery, but remained untamed for too long,” says Valia of The Orphan Pet.Since arriving at the shelter Monty keeps to his kennel. He’s suspicious, feral and lonely. Everyone who has tried to rehabilitate him has failed – volunteers, trainers. Everyone, says Valia. His distrust towards people runs deep and he seems to hate everyone.

“When Alexandros, his trainer started working with him, I wasn’t sure what to expect. But he did manage to finally get Monty out of that kennel, Valia says. “Life in the shelter will not help Monty progress much more. He might get a bit better, but basically this is it for him.” That is, unless someone opens their home and is up to the challenge of helping Monty become a companion dog.His rescuers are hoping that the impossible is possible. After all they’ve seen miracles before.Watch Monty’s moving story below.